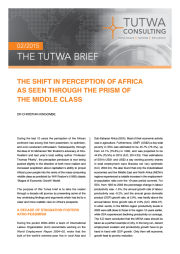 During the 10 year period that has gone by since last I was living in Sub-Saharan Africa (SSA), and until I went on duty at the Africa Development Bank (AfDB) Headquarters in Abidjan in January 2015, Africa in general and SSA in particular has seen the perception of the continent swing first from pessimism to optimism and even further to enthusiasm.

Nevertheless, through my recent missions to Lusaka, Lilongwe and Dar es Salaam in December 2014 and my permanent stay in Abidjan one cannot help but notice the emerging African middle class as expressed in my ECDPM Working Paper, also referred to in my Tutwa Brief.

In this paper I tried to capture the still on-going debate as to whether Africa’s middle class truly was rising or not, and Cote d’Ivoire really captures these key issues well. Since the changing of the guards in 2011 the Ivory Coast has begun to enjoy a new era of economic promise with some of Africa’s highest growth rates: 9.8% in 2012; 8.8% in 2013; and 9.1% in 2014 according to the AfDB’s AEO (Table 2). At the same time Cote d’Ivoire’s Primary School total net enrolment (Table 19) ratio, 2006-2012, was only 61.9% meaning around 38% of the population has no educational attainment, which could become a serious long-term growth constraint. At the moment more than half of the population live on less than US$2 per day, while the lowest-earning 10% of the population only have a consumption share of around 2.2%.

It seems, therefore, that Africa’s growth only reaches the higher earning section of the population. However, broadening one’s scope, by following the AfDB’s (2011) use of an absolute definition, of people whose daily consumption is between US$2 and US$20 (in 2005 PPP) a more optimistic picture emerges. More than half of the population in Cote d’Ivoire belong to this middle-class with a monthly income of above CFA Franc 30, 000 (US$ 50).

According to the AfDB (2011), one out of three Africans currently belongs to their definition of the middle class and potential investors and traders are told this will only get better with time. The “trickle-down effect” will eventually take care of the poor. In that way the “afro-optimism” even veers into “afro-enthusiasm”.

So far, the positive narrative of “Africa Rising” has prevailed, led by investors who have seen in the continent a new frontier for capitalism. Indeed, it is an exciting time to be in Africa owing to the size of the untapped opportunities, but there are still many challenges to resolve. Africa appears to be at a crossroads – it has enjoyed a good run, but the future looks less certain as economic headwinds blow stronger subject to the success of only a handful of key hub economies, most notably, South Africa, Nigeria and Kenya. Instead, rapid economic growth is in many countries simply fattening the rich, as e.g. can be seen by the increasing number of flashy cars driving the streets of Abidjan. Without political leadership able to focus on longer-term growth and prosperity, rather than short-term personal gain, the past 10 years of economic and political progress in Africa, which is neither linear nor guaranteed, could be in danger.