The Shifting Sands of Geopolitical-economy: A View from Davos 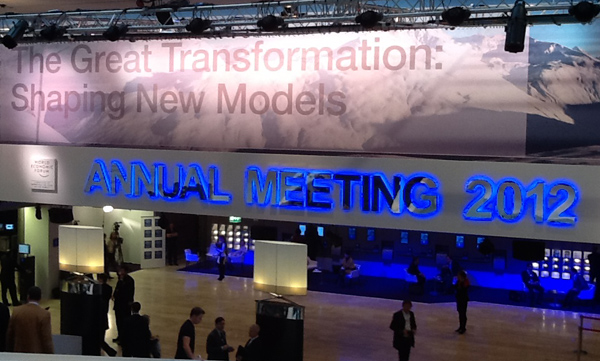 That the world is in a process of fundamental geopolitical and geo-economic change is obvious. However, the contours of change and what they portend for South Africa are difficult to discern, particularly in our naval-gazing, domestic politics – obsessed environment. So for this South African participating in the World Economic Forum’s annual summit in Davos was illuminating.
The geopolitical-economy discussion running throughout the conference centered on three key themes: the future of US power; China’s ascent to power; and the future of the EU.
That the US is in the early stages of relative decline is not in doubt. But it will remain the number one military power for the foreseeable future, perhaps a generation or more. China, despite its spectacular economic growth, is no match on the military front. Russia is arguably ahead of China in advanced weapons technology, notwithstanding its precipitate military decline since the end of the Cold War.
So there are no viable alternatives to US military power. Yet as Iraq and Afghanistan have shown, it also has its limits. Therefore, in US foreign policy circles the discussion concerns ‘balancing’ regional power dynamics through balance of power politics.
The Persian Gulf situation is an excellent example. Having created a regional power vacuum by withdrawing from Iraq, the US is now most concerned about preventing Iranian domination over the oil-rich Gulf States. The Syrian civil conflict directly reflects this regional posturing. In Davos the session on Iran filled up almost instantly. There is a new, gloomy, mood in the air with plenty at stake for the global economy should there be any missteps on either side.  July 2012, when the European Union will likely officially impose oil sanctions on Iran is when things may come to a head.

China is a key player in this tense regional game. On the face of it by refusing to sign up for oil sanctions China appears simultaneously to be the more responsible global power, and frustrate US and EU designs thus increasing its geopolitical influence. It also retains its essential oil imports. Yet this reveals a major strategic vulnerability – its reliance on Iranian oil imports. The US, meanwhile, almost un-noticed has become a net energy exporter by virtue of breakthroughs in natural gas exploitation.
China’s economy continues to barrel along at impressive growth rates. Therefore at some point in the next two or three decades, based on simple extrapolation, Chinese GDP will surpass US GDP. It is also likely that in this timeframe China will put a man on the moon. So, as Singaporean Kishore Mahbubani asked senior US lawmakers, will the US public be prepared for the perception that China has taken over the number one spot?
The answer was an emphatic no. Moreover, the lawmakers wanted to know whether China would play by existing international rules, or seek to revise them to suit itself. These palpable tensions are particularly evident in the trade arena, where a succession of disputes is brewing with some mounting up in the World Trade Organization.  Coming on top of the ongoing European crisis, and broader escalation of actual protection measures in the developed and developing worlds alike, this is a cause for concern.

How bad is the European situation, and is a resolution in sight? Economist Nouriel Roubini, or ‘Dr Doom’, captured the pessimistic mood: his prediction is that the euro area will not collapse in 2012, but in 2013 a ‘perfect storm’ will consume it. Unless, as Harvard historian Niall Ferguson told us, German taxpayers are prepared to transfer about 8 percent of German GDP per year to the European periphery, and effectively underwrite large-scale issuance of Eurobonds, to make fiscal federalism work. The scale of this transfer suggests they will not, particularly since the rich former West Germany is still digesting East Germany.
Nor is it clear that the periphery will be prepared to accept the sacrifices required to remain in the EU. Their prognosis is one of austerity, stagnation, wealth destruction, and rising youth unemployment for the foreseeable future. In return, as Financial Times commentator Martin Wolff noted, they will be expected to ‘become more German’. Resentments are rising on all sides.
The alternative – exit from the Eurozone of peripheral states or even a euro breakup – is unpalatable to all sides. For the Germans it would mean returning to the strong deutschemark, thus hitting export competitiveness. For the periphery it would mean enduring high inflation and consequent wealth destruction.
Europe truly is caught between the Scylla and Charybdis, and its odyssey is uncertain indeed.
So is China the heir apparent? No Chinese panelists I heard saw things this way. One gentleman shouted passionately: ‘China is not ready for number 1!’ China still has hundreds of millions of poor, mainly rural people. This is reflected politically in rising rural protests and growing tensions between the rich coastal regions and poor interior. Furthermore, the country faces a strategic turning point in the elaboration of its successful, export-driven, economic model. Growing pressures from the US, EU, and significant developing countries such as Brazil regarding China’s undervalued currency are testament to this. And their main external markets will be stagnant for the foreseeable future. Therefore looking inwards, to domestic growth and consumption, is on the cards and hard-wired into the twelfth five-year plan.
China’s incoming leadership confronts an epic set of challenges in managing a country that size, whilst their domestic political legitimacy is increasingly uncertain. Many western Cassandras’ have predicted that these forces will ultimately unravel China, but they are more likely in the medium term to occupy the leaderships’ policy bandwidth thus inhibiting external engagement.
China, and three of the five other permanent members of the UN Security Council will undergo leadership transtions this year: the US, France, and Russia. Russia’s transition is relatively predictable; nonetheless taken together these changes may lead to some dithering in international security matters as the year progresses.
Furthermore, with power diffusing in the international system some commentators argue that we are entering a ‘G-zero’ world. The US is no longer capable of dictating events as it did in the aftermath of the Cold War. But its potential challengers are either mired in troubles or not yet ready for the mantle of leadership and unlikely to be so for some time.

What does all this mean for South Africa?
First, relations with the US remain as important as ever. These need to be actively cultivated, not neglected, whilst retaining freedom of action.
Second, our relations with China need recalibration. We need more freedom of action in our relations with China than has been observable in recent months. China’s economic impact on our labour-intensive industries, in the context of its ongoing currency undervaluation, must be subjected to criticism. The currency peg undermines government’s ambitious job creation targets. Since China needs to reform, such pressure would not be misdirected. This requires taking a more critical stance towards China, and aligning with Brazil on the currency question.
Third, we need to consciously learn more from other big developing country democracies about how they pursue market-based reforms. Attempting to copy the Chinese model of SOE management, for example, is highly unlikely to work on our context.
Fourth, since the EU will remain stagnant for the foreseeable future we need to step up our commercial diplomacy and open up new markets for our exports. China is a key part of this equation, so recalibration will require a delicate balancing act.
Finally, we need to pursue domestic economic reforms much more vigorously. More state investment in the economy is needed in certain areas, but the key is to unlock private sector investment. This requires sustained constructive dialogue between government and business over the necessary mechanisms. Ultimately this probably remains the largest challenge of all.
Peter Draper
SHARE IT: