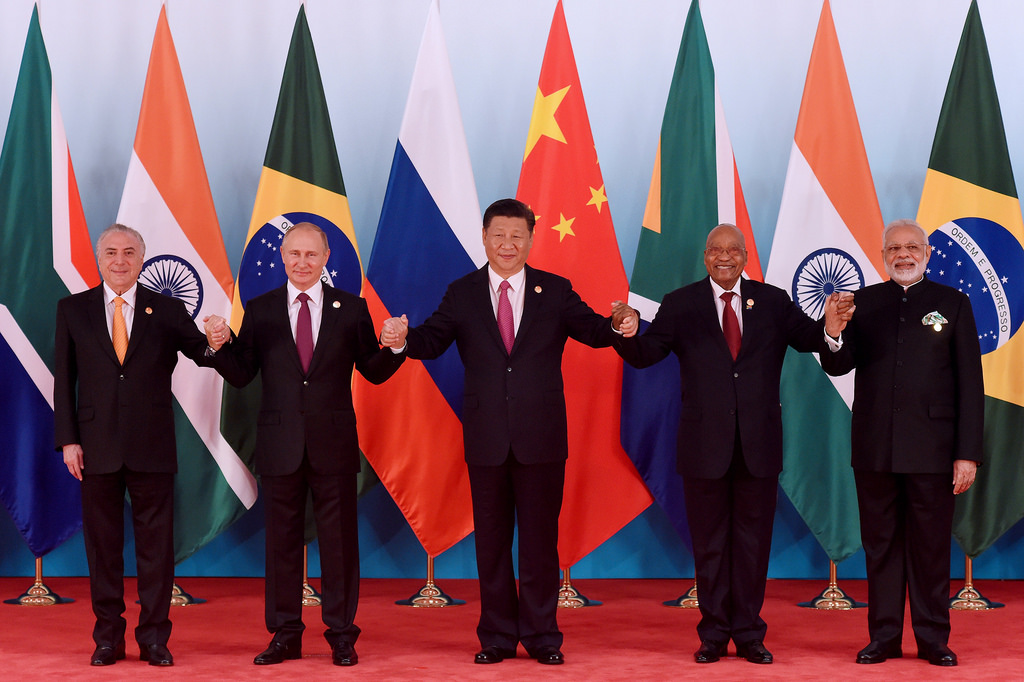 The 9th BRICS summit is upon us, being held in Xiamen, this month from the 3rd to the 5th of September, under China’s Chairmanship. Despite the political and economic turmoil that underpins the BRICS states, one may conclude that these countries are just ‘too big to fail’. We consider the establishment of a Contingent Reserve Agreement (CRA), which may represent a possible mechanism to keep these countries’ economies from plummeting.

Dependence on the US dollar arises because its share within global combined reserves remains roughly above 60%, with 85% of global transactions dollar-denominated. Traditionally, central banks in need of dollars would approach the Federal Reserve. There was no issue with the Fed providing dollar swaps, especially during the global financial crisis, but there is no guarantee that this will be the case for future swaps. Therefore, new monetary patterns have evolved where several countries, as an alternative to signing up for IMF credit lines, would engage in swap lines. Hence the need for the BRICS symbolizing their independence and creating a pool that member states can draw from.

The CRA was introduced during the 5th and 6th BRICS Summit (2013-2014) with the establishment of the New Development Bank (NDB). Its main intention is to lessen BRICS countries’ dependence on the US dollar and the US Federal Reserve System. According to Article 1 of the treaty that sets up the BRICS CRA, its objective is to offer a “framework for the provision of support through liquidity and precautionary instruments in response to actual or potential short-term balance of payments pressures”. The BRICS nations committed a total of $100 billion of their foreign exchange reserves to the CRA. China, with the largest reserves, committed $41 billion, Russia, Brazil and India $18 billion each and South Africa $5 billion. These are available as swap lines, that members can draw on if they experience balance of payments difficulties, as foreign reserves become necessary to remedy a run on the currency. Each country retains possession of its committed resources until a country is granted support, upon requesting for assistance. Article 5 of the treaty specifies the maximum withdrawal limits, indicating that China can draw up to half of its commitment, Brazil, Russia and India their full commitments and South Africa can access twice its commitment, of $10 billion.

In its current state, the CRA is said to act as ‘symbolic and exploratory’ rather than something that challenges the International Monetary Fund (IMF). However there has been a dissatisfaction from the fact that the BRICS possess only 11% of the votes in the IMF, while they account for over 20% of global economic activity. This is indicative of the criticism by developing states towards the Bretton Woods Institutions for being favourable towards western economies. By setting up the CRA the BRICS leaders have started a symbolic process to advance and strengthen their own institutions to counteract certain western biases. It is no surprise that the 9th Summit theme revolves around “Stronger Partnership for a Brighter Future”.

It is evident, however, that turmoil exists in and among the BRICS nations. Certain instances relate to geopolitical tensions between the BRICS nations themselves, such as India’s boycotting of the One Belt, One Road Summit, hopefully to be resolved in the upcoming summit. For South Africa, it is apparent that internal political and economic complications are stewing from a sovereign debt-crisis perspective. The commercial banks remain heavily exposed to state-owned enterprises’ (SOE) debts and the government has become the acting ‘defibrillator’. The news that CITI Bank would not extend South African Airways’ (SAA) debt comes as no surprise, it being the second bank after Standard Charted Bank in June, to refuse to rollover a bankrupt SOE’s debt obligation. SAA’s debt comes due this September and currently sits at R6.8 billion, which would render an additional R7.8 billion payable by the South African government, weakening its fiscal position further. The question remains as to whether banks will unite in declining to roll-over existing SOE debt or will protect themselves from the debt exposure, relying on government to bail out the SOE and settle public debt. The government’s total exposure to SOE’s debt is currently at R19 billion.

Is it then likely for a debt crisis to trigger a rescue from the IMF or a draw down from the specified CRA? Precursors to balance of payments difficulties are usually aligned with a growing current account deficit. According to the IMF’s Article IV assessments, South Africa shows a lessening of the current account deficit but they note that the public sector’s balance sheet remains critically exposed to liabilities from SOEs.

The intention of previous CRAs such as the East Asian Chiang Mai Initiative Multilateralization (CMIM), which reportedly constitutes about $240 billion compared to the IMF’s $720 billion, was the same. However, it has not been used even in the wake of the global financial crisis. This was largely due to the conflicting interests between borrowers and lenders. For instance, countries like South Korea, Indonesia and Singapore experienced major balance of payments issues, in 2008, but resolved to use currency swaps rather than draw-down from the CMIM. This is because the set-up of the Initiative is IMF-linked, where draw-downs exceeding a specified amount require countries to negotiate a programme with the IMF. During the crisis years, these countries required larger reserves, such as South Korea needing $30 billion. It resolved to use a currency swap with the US, as its CMIM portion that was not linked to IMF conditions was only $3.7 billion, which was in any case insufficient. Taking on the $30 billion from the CMIM is said to have been ‘political suicide’ from their perspective.

In the case of BRICS, these large diverse countries have differing interests. Any country in need of balance of payments assistance could require a draw-down from the CRA. If the amounts are significant, certain members may be hesitant and want to impose conditionalities and a monitoring mechanism, especially if there are doubts about repayment. This raises questions on whether certain countries would be willing to use the CRA.

Imposing monitoring conditions may solve the problem of a lack of repayment but it would seem impossible that BRICS nations would want to receive policy conditions from each other. Ironically, within the CRA, the IMF steps in again as a monitor in the treaty. Essentially, when countries draw more than 30% of their swaps, they need to negotiate a program with the IMF, defeating the purpose of independence. This questions the relevance of the BRICS CRA. It is also important to note that substantial funding may be necessary to support balance of payments issues. For instance, South Africa’s non-IMF-linked portion of $3 billion, is smaller than its public debt commitments; one wonders how effective the CRA would be if South Africa were to request assistance. One can take the view that countries would rather choose independence over drawing large amounts that would involve taking on conditionalities from the IMF and oversight from member countries.