The Uncertain Future of Europe 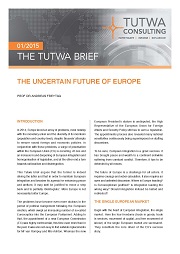 At the moment the EU is facing a potentially deflationary scenario, to which the European Central Bank (ECB) recently responded by announcing a programme of Quantitative Easing (QE). This strategy seems to have worked for the US, and UK but will it work for the 19 nation strong EU? If not, will the European Monetary Union hold together? Furthermore, the recent election in Greece, and the marches in Spain and Germany are testament to the fact that not all EU citizens feel that more Europe is a better Europe.

Pitting QE and its intentions against the current reality in Europe a quote from Jean de La Fontaine comes to mind, “A person often meets his destiny on the road he took to avoid it”.