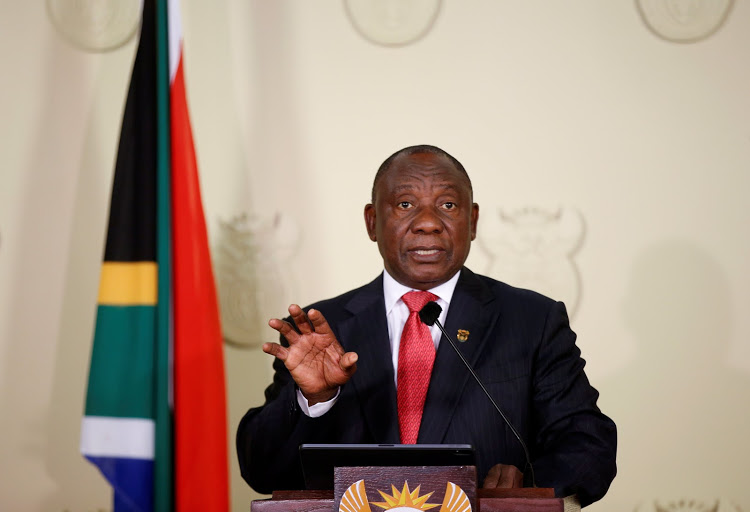 The leaner looking Cabinet has been trimmed down through the merger of several ministries. As a result, President Cyril Ramaphosa reduced the size of his cabinet by eight ministers (from 36 to 28) and reduced one deputy minister post. In the past, there has been a perception that selections were very much subjective based on presidential preference. Clearly, there was significant ballooning during the Zuma administration as shown in the table below.

It is not surprising to see a bloated cabinet during the Zuma era, with perhaps a need to ensure that his patronage networks were further entrenched. Ramaphosa has spoken out on his commitment to the continued “reconfiguration” of government, which would mean we are likely to see smaller cabinets from now on.

Taking from the SONA, President Ramaphosa noted that the merged departments were focused on greater coherence and coordination. The number of ministers was reduced from 36 to 28.

South Africa’s leaner cabinet is still larger than most other countries (Figure 1). The closest in size is the Indian cabinet, which has 55 members, for a population of almost 1.4 billion, in comparison to South Africa’s 57 million. Trump’s Cabinet, for example, constitutes the Vice President, Mike Pence, and the heads of the 15 executive departments, serving a population six times larger than South Africa. While it is not necessarily practical to equate countries at the same stages of development, compared with Nigeria’s cabinet – that serves roughly 190 million in population – South Africa’s is still larger. Notably, larger economies tend to have smaller cabinets, which raises concerns about the efficiencies and capacities of our executive.

Figure 1: Comparison of the number of ministers in various countries 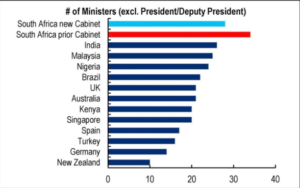 On a positive side, 50% of the ministerial positions are held by women for the first time in South Africa. This is an exemplary change as, on average, female representation in European cabinets is 28%, according to The Economist.

It is important to understand that the size of the cabinet may have decreased, and this may look good at face value. What is important to note is the number of tasks per cabinet may have also increased meaning that the capacity issue may not be entirely addressed. What one may find are bloated services within some ministries, while others have diminished services, due to the merger. Will this lead to the appointment of new advisers to ensure a smooth transition?

Cost-saving towards trimming the cabinet

According to some annual reports of government departments, the ministerial administration cost of government departments averaged R30.5 in the 2017-2018 financial year. These costs include the upkeep of ministers and deputy ministers and their related expenses (cars, housing benefits, security, travel, and advisers or people in the minister’s inner circle and other privileges) which were outlined in the ministerial handbook of 2007.[2]

Initially, according to President Ramaphosa, the smaller executive was meant to reduce government spending, and effectively should mean a saving of R21 million a year, in salaries alone. As an example, in terms of salaries, ministers earn an annual salary R2,401,633, while deputy ministers get R1,977,795 according to Africa Check. This implies that, on average, the state spent roughly R 146 million a year on the Zuma Cabinet (73x R2,000,000) on salaries alone. With a reduced cabinet of 64, this is an estimated saving of up to R 146 million a year.

It is clear that the diminished number of cabinet members has slightly dented the wage bill, positively impacting the fiscus. However, this does not change the fact that government wages as a percentage of GDP are at around 14% — higher than the global average of 10%.  To understand these cost dynamics better, whether paying fewer salaries cancels out departmental costs, Overall, a focus on policy implementation, amidst the restructuring, would make the cabinet reorganisation more worthwhile.