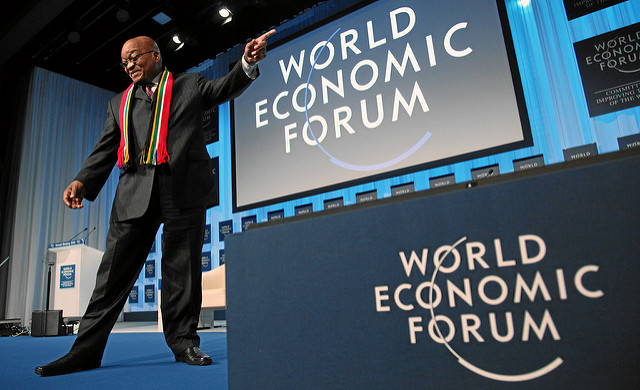 These times would test any government and country, but South Africa faces its own domestic challenges that in the best case will inhibit its responsiveness, and in the worst case exacerbate the domestic political impact of these global currents.

A backlash against economic globalization is the thread running through what some commentators are calling the crisis of the industrialized West. It manifests in rejection of economic, cultural, and political openness, particularly in the trade, immigration, and democracy terrains. It partly explains the rise of Donald Trump and his anti-trade openness, anti-immigrant, ostensibly anti-elite, agenda. It also explains part of the Brexit phenomenon, notably its anti-immigration component, although, unlike Mr Trump, the so-called “Brexiteers” are free traders at heart. And it explains the fault lines in the forthcoming, and highly consequential, French and German elections.

These trends coalesce into a progressive weakening of Western consensus on approaches to managing the global economy, as “the rest” rise to economic prominence yet do not yet possess the capacities to assume global leadership. Consequently, there is an uneasy interregnum in the management of global affairs, dubbed the “G-zero” world by the Eurasia group.

On the geopolitical stage there seem to be two clear winners from these developments: Russia, and China. Neither are friends of western free-wheeling democracy so, to the extent they benefit, other leaders with less liberal mindsets, such as in Eastern Europe, will be encouraged. To the extent that authoritarian tendencies are present in South Africa, they too will be encouraged, and perhaps reinforced via our membership of the BRICS grouping.

Russia stands to gain, geopolitically, from Mr Trump’s Presidency, although whether and to what extent this will materialise, given institutional and Congressional resistance to Mr Putin in the US, remains to be seen.

China looks likely to be the target of a concerted US trade offensive. At first sight this would harm China’s highly export-dependent economy, exacerbating domestic political tensions. However, President Xi Xinping has one eye firmly fixed on the Chinese People’s Congress scheduled for the final quarter of this year, at which he is keen to cement his hold on power and, perhaps, launch a new wave of economic reforms necessary to address mounting domestic economic challenges by rebalancing the Chinese economy towards domestic consumption. Compromise with the US could be interpreted as weakness, and will consequently be relatively low down his radar screen.

As many globally minded leaders recoil from Mr Trump’s inward-looking trade and investment policies, so new global leadership will be sought, and China has already signaled its willingness to fill the potential void. Depending on how China comports itself in its East Asian region, this dynamic, coupled with Mr Trump’s general scepticism of the US military alliance system, could lead to a rebalancing of political power in that region, provoking Japan into action, with unpredictable consequences. Throw in the volatility associated with North Korea’s erratic leadership and it is clear that tensions in the East Asian region – the crucible of the twenty first century – will sharply ratchet up this year.

These dynamics highlight what is at stake at the global level: the future of the Post World War Two Liberal International Economic Order. Given domestic resistance Mr Trump is unlikely to tear up the multilateral institutional arrangements crafted over more than seventy years by successive US Presidents. However, from trade, through climate change, to Western security, he is likely to at least disrupt them, if not overturn them.

The more his destructive instincts are brought to fruition, the more erstwhile critics will come to appreciate just how crucial these institutional arrangements have been in maintaining international peace and security amongst the great powers (and therefore for the planet), and just how they have anchored post World War Two economic growth and development.

Which is not to deny the many problems they contain, such as locking in distorted agricultural trade regimes. However, to the extent that “the rest” depend on Western markets and investment, the gathering western backlash against globalization will compromise the developing world’s economic prospects and compel them to diversify their trade interests by setting up, or strengthening,  parallel governance structures, particularly at the regional level. In this light, while the prospects for Africa’s grand trade project, the Continental Free Trade Agreement, are not great, they may receive a fillip.

Overall, the world seems set to take a ride down the roller coaster of deal making based on raw power politics, away from the more genteel power politics, buttressed by international rules and institutions, which we are used to. In this, mercantilist, world we are heading into, the wielders of cyber warfare will thrive, and their actions will exacerbate already inflamed nationalist passions and illiberal reactions.

Where can South Africans look to for hope in this gathering gloom? Notwithstanding the backlash against globalization, the most positive integrative forces, especially technological change, are likely to retain much of their potency. However one, cross-border production networks, is already under substantial attack in the US while the other, the information technologies that underpin the “Fourth Industrial Revolution”, are principally to blame for the populist phenomenon that gave rise to Mr Trump and show no sign of abating.

The first is more relevant to us. In case South Africans have not been watching, President-elect Trump is engaged in a twitter war with the international motor industry, threatening “border tax adjustments” if they relocate production to Mexico (today, tomorrow it could be SA). This pressure is likely to intensify, with the US Treasury expected to designate China, Japan, and perhaps Germany, as “currency manipulators”, justifying additional border tax (import tariff) adjustments in the form of countervailing duties.

Retaliation is certain, but the extent and contours are unpredictable. Global uncertainty, characterised by outbreaks of trade wars, increasing national security contestation, hostility towards “them”, and an increasingly fraying institutional fabric, seems set to increase.

The already fragile global economy is likely to suffer in this environment, notwithstanding frothy financial markets punting on Reaganesque supply-side economic policies emanating from Washington. Sooner or later the political, and economic, limitations, as well as contradictions, inherent in the emerging Republican economic policy package will become apparent. If there is one thing that markets do not like, it is uncertainty. Unpredictability corrodes investment confidence, particularly of the real economy type.

Therefore, after the initial euphoria of Mr Trump’s first one hundred days, it is likely that a reality check will set in and, if accompanied by highly conflictual trade and investment relations, investment plans will be recalibrated, with a view to shortening supply chains so as to minimise the risk of policy or security induced disruptions. The search for premium business environments that stand better chances of maintaining good relations with the US will intensify.

As the Trump administration warms to its task of blocking Chinese economic expansion, and China retaliates, countries will increasingly be placed under pressure to choose sides. It is very difficult to see the Trump Administration, with all the prejudicial baggage he brings, winning this contest for hearts and minds in South Africa.

When the ANC dominated our politics like a colossus these geopolitical tensions, while present, were quite manageable. Now, as political power within the governing alliance, but also in the country, is more contested, the foreign policy terrain has become more fluid and may also become more politicised. The Tshwane Mayor’s recent Taiwan foray consequently assumes more significance.

The US, and the West, have generally been convenient, if historically-deserved, targets for various tripartite alliance factions even as the economy depends on Western markets for our value added manufactured goods exports, and Western investment to drive economic growth more broadly. “White monopoly capital” in South Africa, with its obvious western linkages, is a natural extension of this safety valve, and so more anger will be directed towards it, particularly the Davos elite, by factions of the tripartite alliance as the ANC’s succession battle intensifies. Depending on who wins, there could be serious legislative consequences for the private sector, both domestic and foreign, operating in South Africa.

Therefore, the “investment strike” by South African business is likely to continue until the succession dust settles, and will compound the negative international environment to deliver structurally slower, and perhaps negative, growth this year. With ratings agencies poised to deliver downgrades, the time to fasten seatbelts – again – is upon us.

Article originally published on BusinessDay Live, 13 January 2017. Please note that a premium content paywall might be in effect.