What can the G7 do for Africa?

On the 7th of June the group of seven major industrialized countries (G7) convened for their annual summit in Schloss Elmau, Germany. While there were other pressing matters on the agenda Africa still made the list. After all, Africa is the continent that on average has grown the most in recent years. As an emerging continent, Africa can be considered a market for the future. 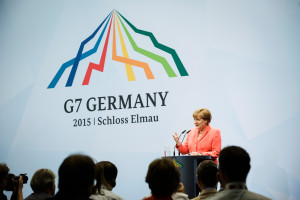 In Africa much has changed for the better, but there are still numerous ‘dictatorships’ (only one-third of African countries can be described as genuine democracies), corruption is still a widespread problem and in many countries management is relatively weak. On the positive side, there is a growing middle class. This is particularly important against the current governance background in Africa as the middle class can be seen as the pillar of democracy, the more citizens gravitate towards the middle class the more they will demand liberties and civil rights.

But this positive perspective is not prevailing in Germany; for many German politicians and citizens, Africa is seen more as the crisis continent: Ebola, AIDS, corruption and unproductive agriculture. This image corresponds to the federal government’s general Africa strategy, which – summarized a little harshly – is not on economic cooperation, but rather the reduction of poverty, especially with development aid and a focus on agriculture.

This perception was partly mirrored in the agenda of the Federal Government for the G7 Summit. Central to this agenda is health (the many epidemic diseases, shortage of doctors, poorly developed insurance systems), which in the face of numerous unsolved problems is quite significant. But to be fair, it must be noted that the Federal Government significantly widened the Summit’s Agenda on Africa, which included finding ways to improve governance, grow potential for trade and investment, innovate policy and address climate change in that order. The choice of topics is thus better chosen than the weighting.

And the G7 is right to not only credit Africa with strong growth, there are also many innovative ideas coming from Africa. Think of the many applications of mobile technology. When talking to African representatives in Germany, for example from the business community or the embassies, you get a relatively clear signal. They want to talk about business ideas, investment and profit opportunities; aid is not mentioned.

An excellent example of this appetite for growth and expansion was evident at an event in the Thuringian State Representation, Berlin, at the end of May. The Ambassador of Botswana in Germany, Mrs Tswelopele Moremi, gave a presentation on the investment conditions in Botswana that wooed German investors. The country is politically stable, corruption is low, and economic freedom high. And indeed, the country has recently attracted some big investments.

The Ambassador’s presentation took place during the conference on the topic “Enhancing Africa’s Opportunity: The G7’s Contribution and Challenge “, organized by the G8 Research Group (at the University of Toronto), the German Chambers of Industry and Commerce, and the University of Jena. Participants from Europe, North America and Africa were in agreement that the G7 does not have the required capacity to “save” Africa. This must be done in Africa itself.

The G7, however, can facilitate African governments to take necessary measures for further development. In this respect the G7 can contribute to the so-called public good, in particular the protection of the environment, improving health (especially with regard to epidemics), and innovation-friendly rules such as assistance in the production of generic medicines or concessions in patent protection.

When it comes to climate change, the G7 countries should pursue their own modes to further reduce CO2 emissions and help developing countries to, themselves, reduce emissions without requiring the same effort. The outcome of a fair climate agreement, to which the G7 contribution would be significant, would be helpful for further global cooperation. In this regard financial support for developing countries makes a lot of sense.

This being said emphasis should rather be placed on foreign trade and investment policy. This will involve further liberalization measures, mainly for sensitive products, in the framework of different trade agreements such as the EU’s Economic Partnership Agreements (EPAs) and the United States’ African Growth and Opportunity Act (AGOA). Secondly, in negotiating the Mega-Regional trade agreements (TTIP and TPP) the G7 countries should keep markets open to African suppliers. This would require mutual recognition of standards, which can for example be extended to African companies. This would mean that a company in Lesotho can export US standards compliant goods to Europe and European standards compliant goods to the United States.

In addition, the G-7 governments could encourage, by means of guarantees and insurances, their own companies to invest in Africa and to develop markets. Only in this way can African companies move up the value chain and generate greater added value domestically. Especially resource-rich countries and agricultural exporters can draw great benefits. Without the willingness of the G7 countries’ private sector to get involved in Africa the potential will remain largely unused.

The summit indeed decided, with a corresponding obligation on foreign trade for Africa, to continue to open up and to support private activities on the African continent, overall a good signal. In addition, this signal would mean that the G7 have that extra prosperity elsewhere – including in Africa.

Again, the move to Africa must be accompanied with a change in the perception of the problems and a corresponding reallocation of resources in cooperation.  There’s a certain imbalance in the German ministerial bureaucracy and the downstream public agencies. Thousands of people are working in the Federal Ministry for Development Cooperation and its agencies, especially in the area of development aid and Africa; while the Federal Ministry of Economics have fewer than ten employees who deal with Africa. This does not do justice to the growing importance of African countries, their people and businesses.

The original article was published on the 5th June 2015 by WirtschaftsWoche, available here in German.